We have the boys to entertain, so we are doubly ambitious to get ashore and see what Santo has to offer.  We did a tour to a swimming hole back in Port Vila.  So we decide to do that here too.  Another good day. 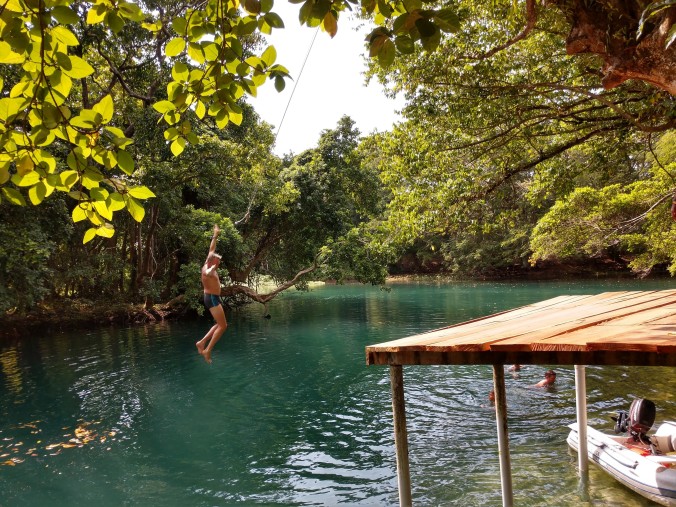 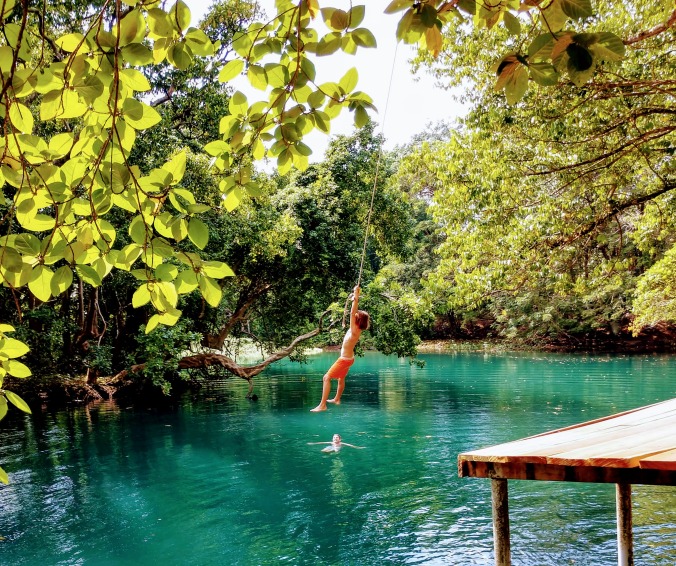 Now next time someone tells you to suck in your gut be aware that this action does unfortunate things to the expression on your face.  As illustrated below…

And it would appear that the children have been a bad influence on Katharina.  She used to be so well behaved… 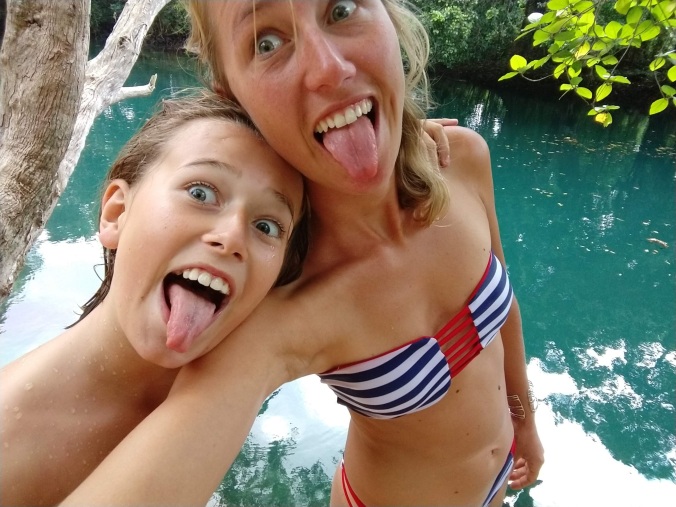 Another day we took a tour to a village a bit inland from the coast.  There we would be hiking in the forest and treking through a cave that a river had carved into the hills.  We started in a van that took us up to altitude.  Then we hiked into the village.

Notice that the grass at their feet and the dirt yard are completely manicured.  In our travels in all of the south pacific this was the rule.  Well tended dwellings.

When we arrived we came upon a group of men that were rendering Kava root into a paste that could be used to make the Kava beverage.  They must use a different kind of Kava root in Vanuatu.  Or maybe a different process.  It has a greener flavor than Fiji or Tonga. 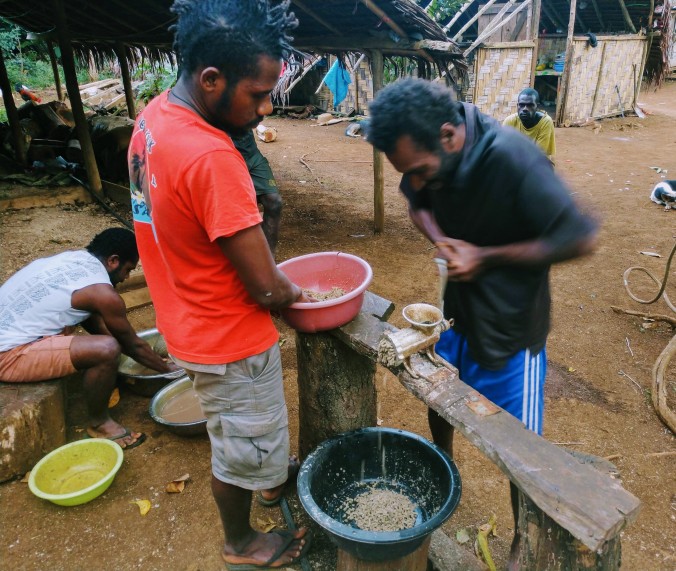 Here the guys are working the root fibers through a meat grinder kind of device.  My mom had one of these and in her world it was for grinding meat to hamburger.

Next you put the pulverized root in a sack and work that sack though the water to create perhaps a tea that tastes of the earth.  You drink it from a coconut shell that is passed around and leaves your tongue a bit numb.  Yer partying now mate!

Shortly after we arrive we are set up with a guide for the bush hike.

This takes us through the forest and down into a canyon.  Steep.  They had a network of ladders to make it all happen. 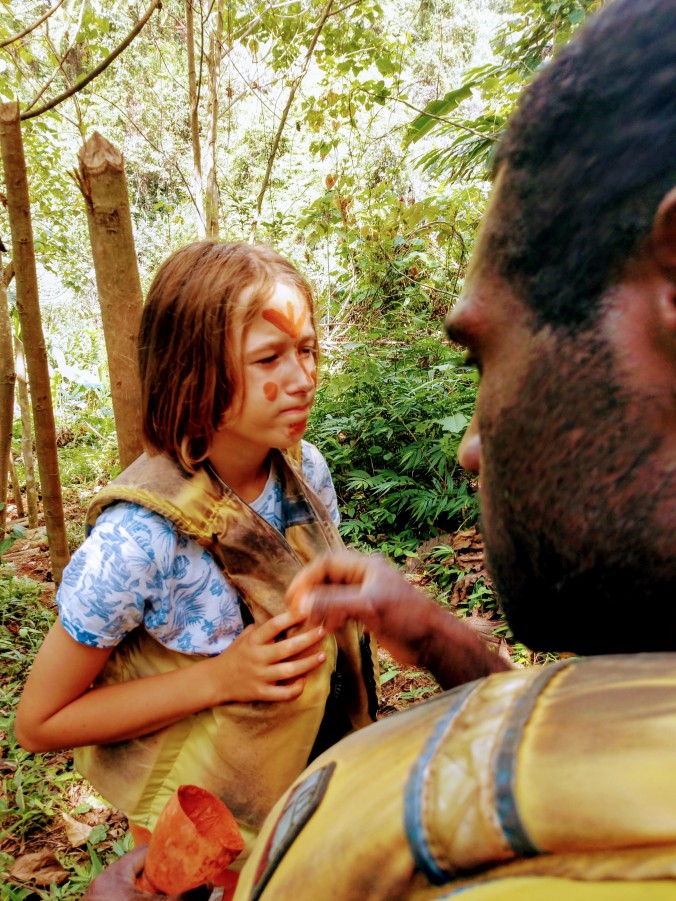 Then it was time for face painting to appease the gods while we traveled in their forest. 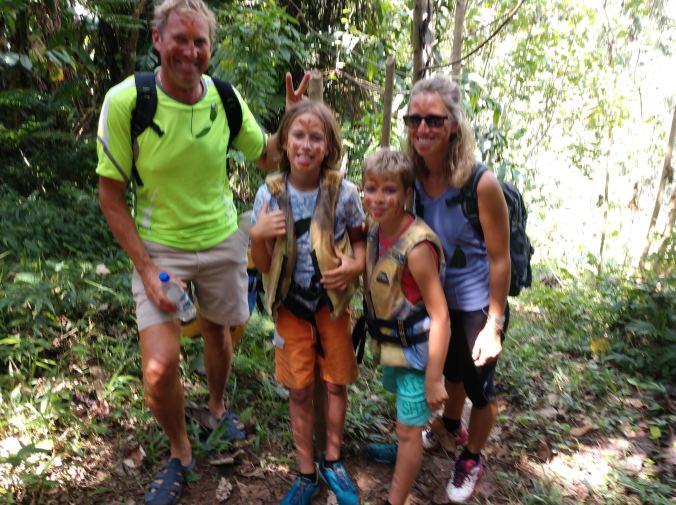 Sorry about the ears Lukas.  Some day I’ll grow up.  maybe.

The river runs through the cave it has created over the eons.  Notice someone disappearing into the cave upper right.  And what do caves have?  Bats.  Lots of them.  And what do bats do?  Yes they do do.  The rocks inside the cave are slick with it.  Lets just say you would not lean on those rocks twice.

In a couple places the roof of the cave opened and you got some light.  But mostly dark for sure.

More ladders and some ropes helped us through the cave,

At last!  There was a Light!  Which got bigger.

Looking back at our exit.

After lunch on the shore we headed back to the village.  Mostly walking down the river bed in waist high water. 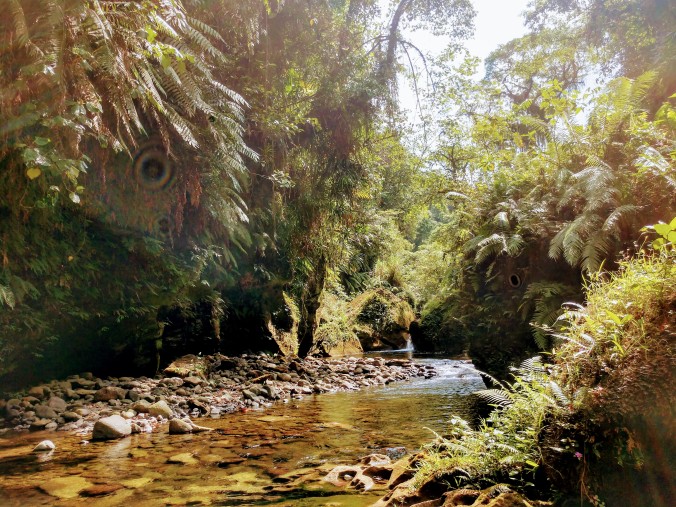 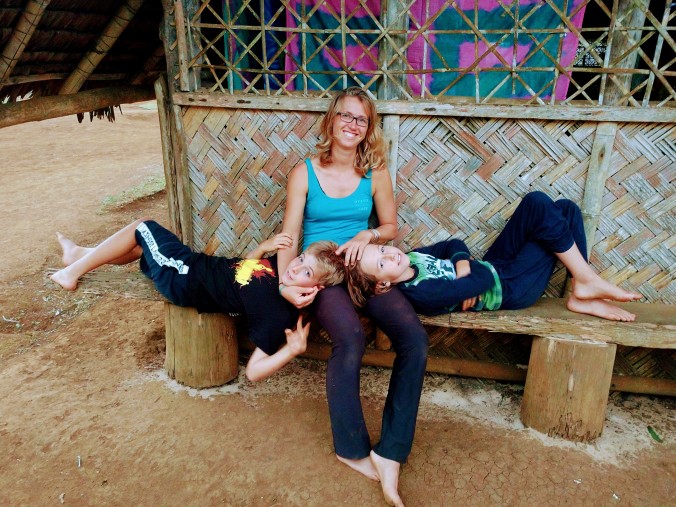 These folks will sleep well tonight.

But before any sleeping its dinner time.  Join us in the cook house.  Where it is quite dark….

Our chefis using banana leaves make up the cooking enclosure.  And into that go roots and other veggies.  Then the whole thing is put on rocks heated with the fire.

While the cooking takes place there is time for some juggling. 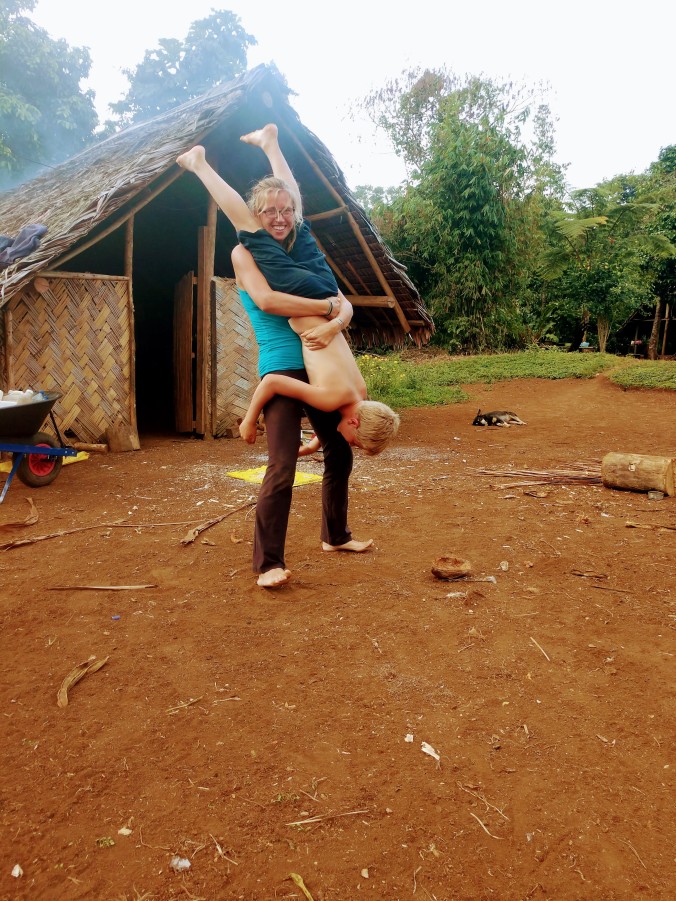 And then it is time to dine.

Mosquito nets kept us comfortable, but I have to say that bugs were not a big problem in any case.  The next morning we hiked out to the van and found our way back to Spill The Wine.

Last detail was for Simon to finish his openwater diving certification.  Kat takes him off to the divemasters and he passes nicely.  Congratulations Simon!  Simon and Lukas both got to swim with turtles.

Guests come and guests go.  It is time for Kat to pack up the siblings, take them to Sydney, and put them on a plane to Germany.  They will never be the same.  Neither will I…  🙂

Wait until their parents get a load of their cool tattoos!!

Where Are We Now?

Click here to be taken to the snap.ocens tracking website. When you get there, on the left side of the page, type "spill the wine" into the "Name" field. (No, "ocens" is not a misspelling, we claim no responsibility.) ;-)