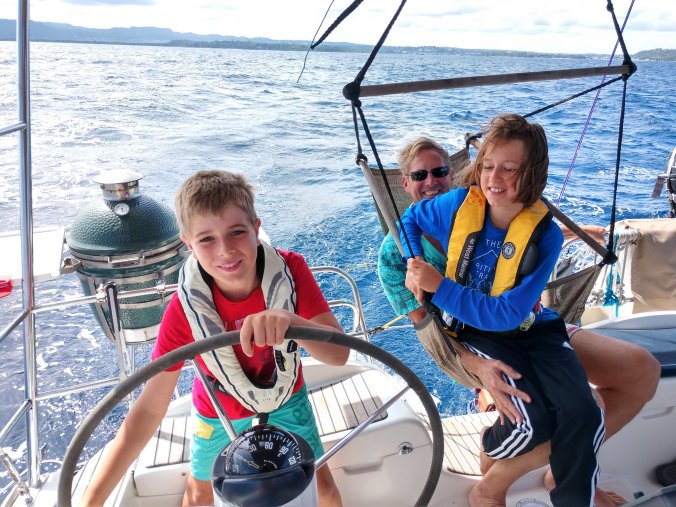 The crossing to the Maskelyne archipeligo off Malekula island goes well. Good wind and no one ill. The arrival was dodgy however.

There is a bit of a bay and we could see the village. But as we entered the bay it became very shallow. Spill the Wine draws six and a half feet and I was reading 8 feet on the depth sounder when we decided it was time to turn around. Our rudder scraped on something as we made our turn, so ya, shallow.

We exited and turned the corner looking for another bay to anchor in. it’s about 4 pm. It will be dark soon and we need to find a place to park Spill The Wine. Maybe 15 kts of wind and water choppy. Less than ideal for anchoring.

I have hoisted Kat up the mast so that she can get a bird’s eye view of the water looking for comfortable depth. I think it’s her favorite place on the boat. She reports that there is a small fishing canoe pursuing us. 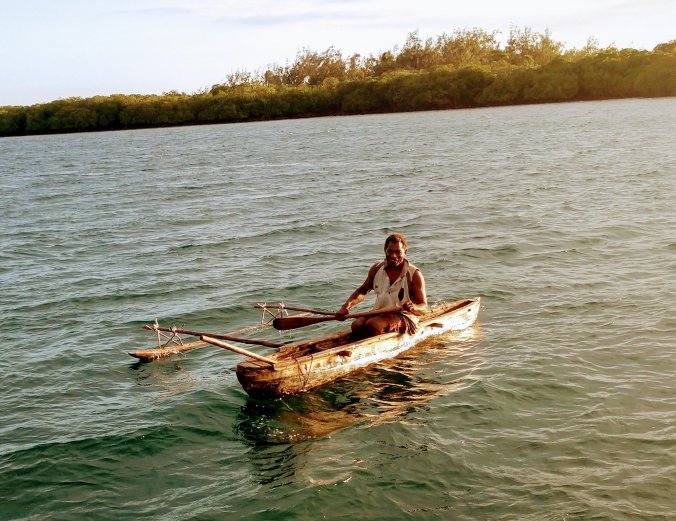 One of the men from the village has come out to tell us that indeed we were almost in the anchorage and we just needed to go a little bit further. Martin offers to show us the way.

A bit of a leap of faith here but we decide to trust local knowledge. We follow Martin through the pass and he was right. It once again became 8ft deep and we draw 6 1/2. Aggghhh! But then it went to 30 feet and we can anchor quite nicely.

I put the dinghy together and went to shore quickly to thank Martin for his help with our passage. He invites us to shore the next day for a tour of the village. 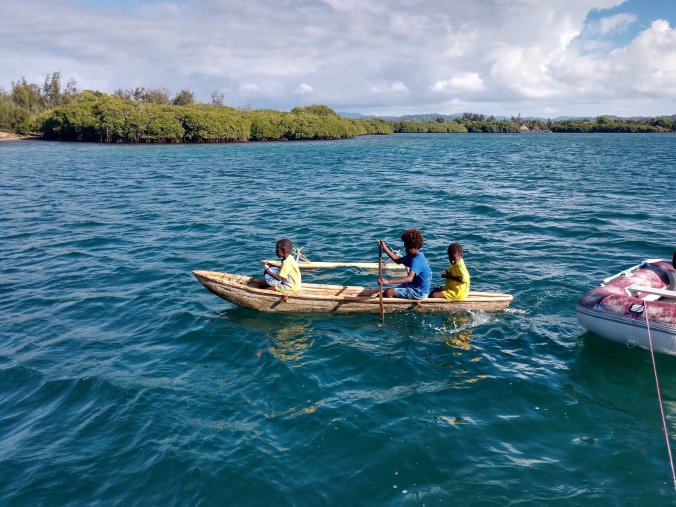 The next morning we wake to find Pirates in the anchorage.

They look friendly so I invite them aboard. This thing with the hand signs is all over the South Pacific.

We go ashore for the village tour with Martin.

One of the local kids shows us how to climb trees for coconuts.

So the locals set a bad example and the siblings are sucked in!

There are wells on the island for drinking water.

Folks still collect roof water for other than drinking purposes. This we saw all over the South Pacific.

I spoke to the principal of the school. They have a large capacity water maker. He explained that the high pressure hose blew out. Asked if I’d take a look. Something broken? That’s my thing.

Nice install. Well organized. Good tool supply. Whoever did this even thought to leave behind extra high pressure hose. 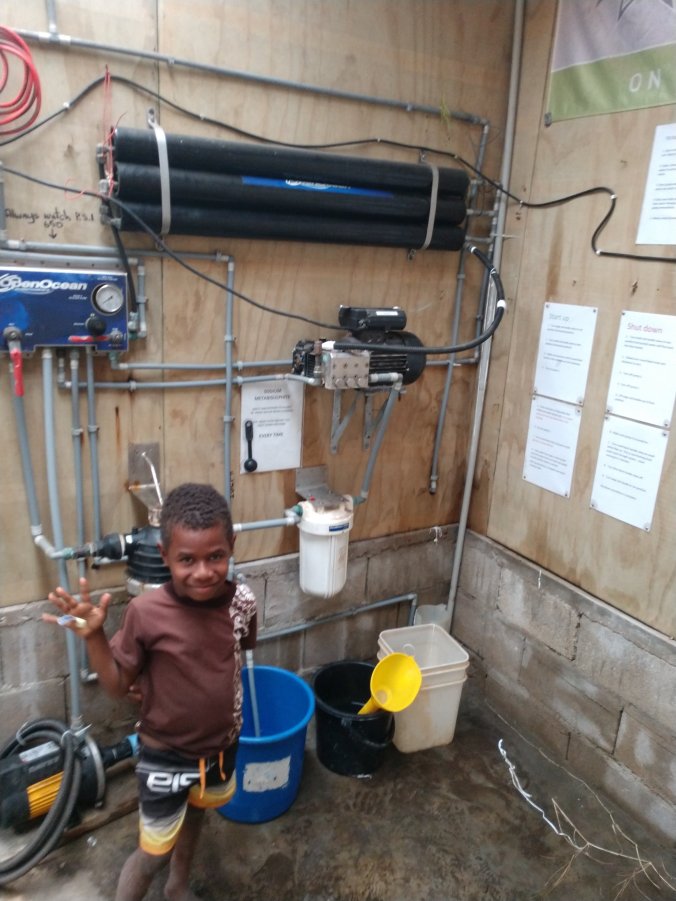 And yeah that hose below looks ready to be retired.

I was able to use the sealing ferrules over again on the new hose and soon they we’re back in the water business.

I spoke to Lynn. She’s the person that put this system in. She wants to know what the specific gravity of the various battery cells is. She is in New Zealand and wants to know ahead of time so she can get new batteries shipped in before she arrives. She says there should be a hydrometer present in the tool kit. Well maybe there was, but no longer. What to do… I don’t have a battery hydrometer. But I do have a beer hydrometer! Let’s try it.

Extracting some battery acid for testing. 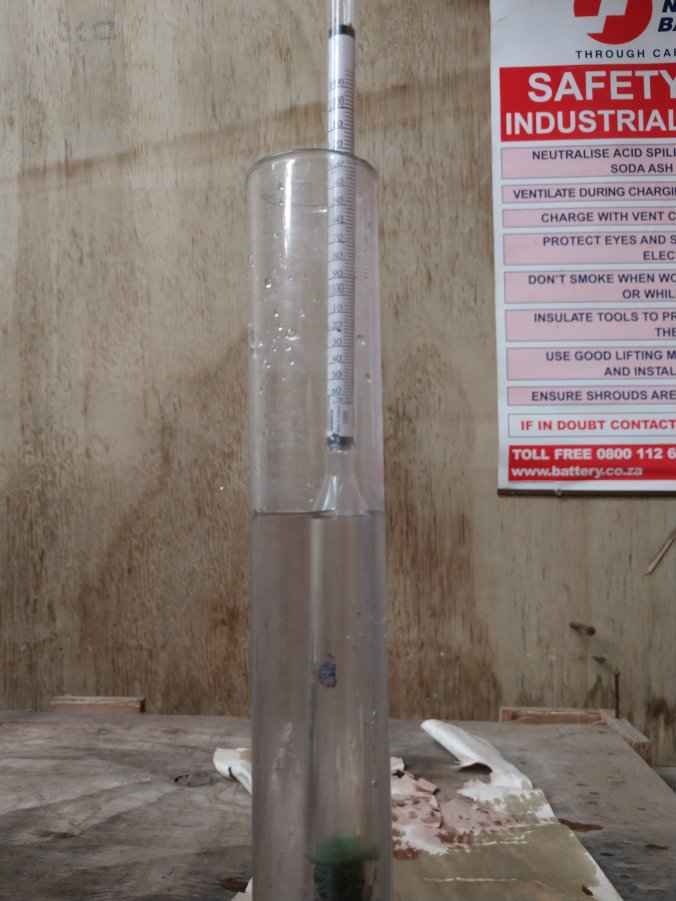 And here is the result. Being a beer thermometer it’s not calibrated for battery acid. But the first photo shows the hydrometer sinking. Almost all the cells showed the hydrometer floating like in the second photo. So Lynn thought there were some dead cells and she was right. Anyway she is happy to have advance information so she can plan her next maintenance visit.

The boys got to play more soccer here. And left a couple gift balls behind. Yay!

We did eye examinations on the siblings just for fun. They passed!

We also did something Kat called the dinghy challenge.

One more thing. A number of people have asked me if I’m worried about piracy. Well I was not until those scallywags Lukas and Simon came on board and fomented a Mutiny. STW was transformed into a Pirate Ship!

It all started innocently enough. First there was an unusually shaped bamboo stalk/root that looked like a dragon’s head. After it was installed on the bow, morale on STW took a turn. And one day when I went off in the dinghy. Upon my return I was presented with the above insurrection! I had to threaten to cut off the chocolate rations in order to regain command. The keel haulings were tough. The boys submitted to their punishment but they were scared. I had to be keel hauled too. Times are tough on the high seas! After the keel haulings peace was regained in time for an orderly anchoring at Utanlangi.

I dinghyed ashore to ask the chief permission to anchor and come ashore with my (unbeknownst to him) mutinous crew. He seemed to think that was fine. And it was fun to catch up to Alex and Sarah again.

This photo is significant for two reasons. One is the elegant photobomb on the part of Sarah in the back right of the picture. The other is the “stickmeat” I am nibbling on that I purchased at one of the booths on the beach. Not my usual but tasty enough kebab.

Nguna has 13 villages. As it turns out they have all converged on Utanalangi for a big soccer tourney and general independence celebration. The players are quite skilled. There is a program of musicians. One player recognizes me. I saw him busking in Port Vila. I supported his efforts there and now here he is in Nguna. Along with a number of other awesome players.

The stand up bass is an unusual element for me but common in this neighborhood. The musician in the blue hat is working it. It is a cubic box with a fretless neck. The neck is jointed so one of the variables in the playing of it is how much you stretch the string with that neck. However it works, it works fine.

Notice the wire barrier enclosing the stage. This place must get rowdy from time to time! Actually no. This is so they can lock it up. There are quite a few buildings without doors and walls here.

Simon and Lukas get to play soccer and we all played volleyball here. The snorkeling and diving here was some of the best. The village has set aside half the cove as a no fishing park reserve. Good stuff.

Something about a dinghy and kids. Everywhere I go there seems I get a dinghy full of kids. And the sand that sticks to them accumulates… In the dinghy! Oh well! But it’s hard to photo them IN the dinghy. As soon as I approach they all jump out. Lukas and Simon left a few soccer balls behind for this crew. Nice kids.

I asked the chief if it would be good to do an eye clinic here and give away reading glasses. He liked the idea. Chief gets the word out. We set up in the local first aid center.

One of the chief’s sons is the medic. He helps out with the clinic as translator.

Here is one of my earlier patients sporting her new spex watching the show. We saw quite a few folks then cleanup. There is more music that night. The eye team sleeps well.

Thank you Nguna island. Our next is Lamen Bay on Epi island. We leave at midnight. The anchor it was tricky to recover. Many rocks below and those rocks became rather attached to my anchor chain. A little push and pull gets it loose.

The boys get the Scopolamine patches. Night passage goes smoothly. Good wind. Nobody gets seasick. The next day we have dolphins joining Spill the Wine. Cavorting at the bow for 20 minutes. The kids dig it! 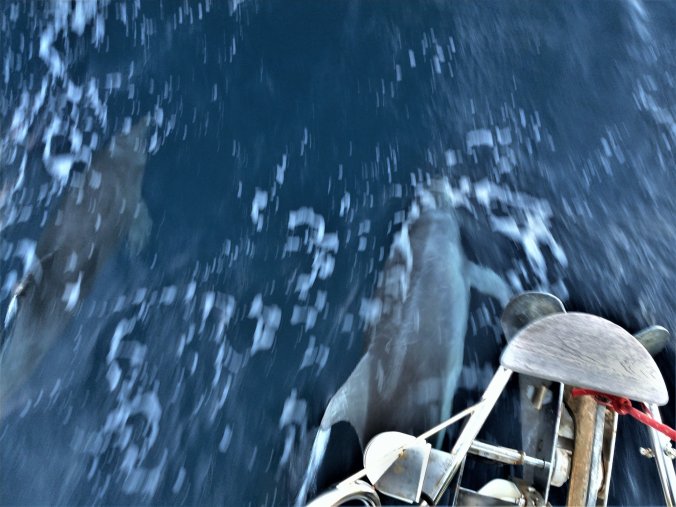 Kat has a go at swimming with them. Being towed behind the boat here. Dolphins were unimpressed.

Lamen Bay turns out to be awesome. Right after we anchor we are on our way to shore.

We encounter a fellow fishing out of a dugout canoe in the bay. And we meet Masing. He and his wife Ruth became our guides for our visit. 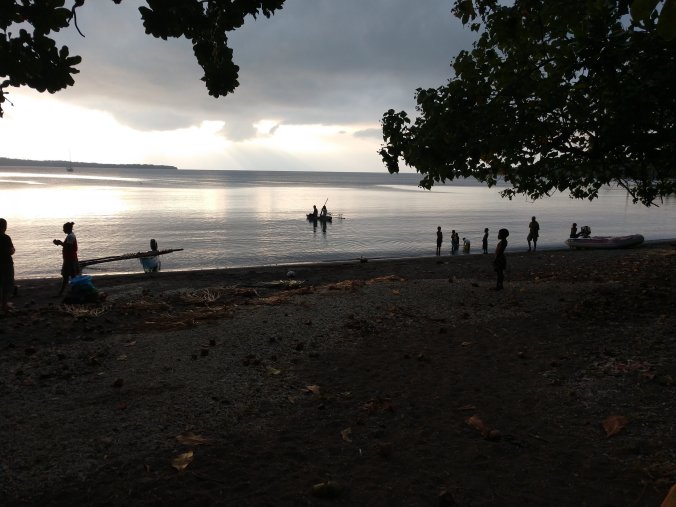 These people really live in paradise, and they know it. Sunset finds them together on the beach. Why not. 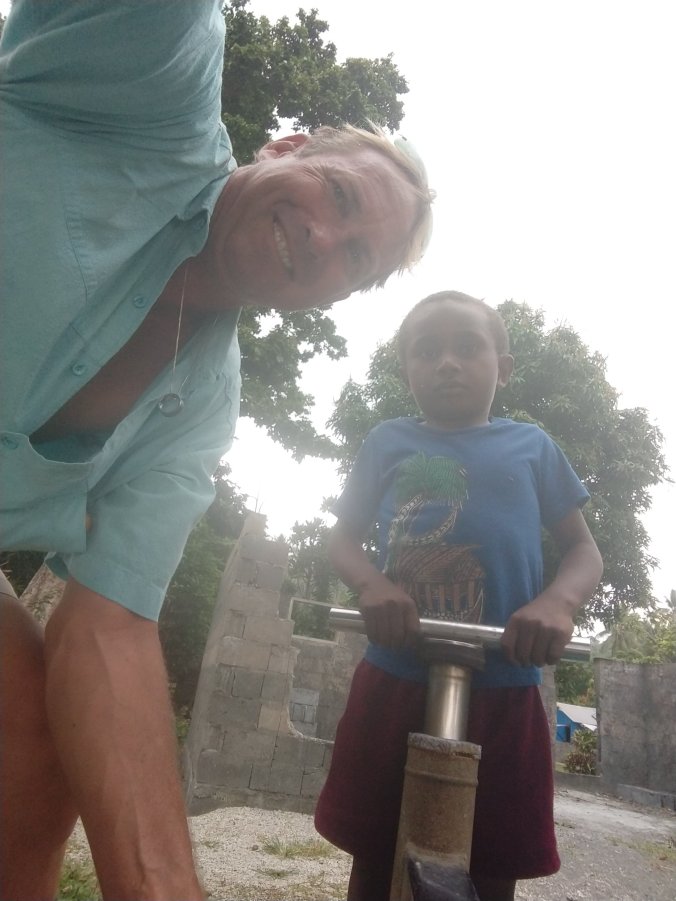 is village has a bottomless well. And there are always little kids looking to help you with water. Masing tells me in a bad dry season this well continues to deliver when others fail. Apparently Australians came and drilled this quite deep into the earth. Fed by rain in the mountains I suppose. The odd bit is this pump is less than 50 meters from the beach. Who knew. We take advantage and get ready to wash clothes in buckets. This offends one of the village residents. They lend us a proper washtub. They also invite us to use their clothes line. Nice!

This village is well groomed. They all have been. 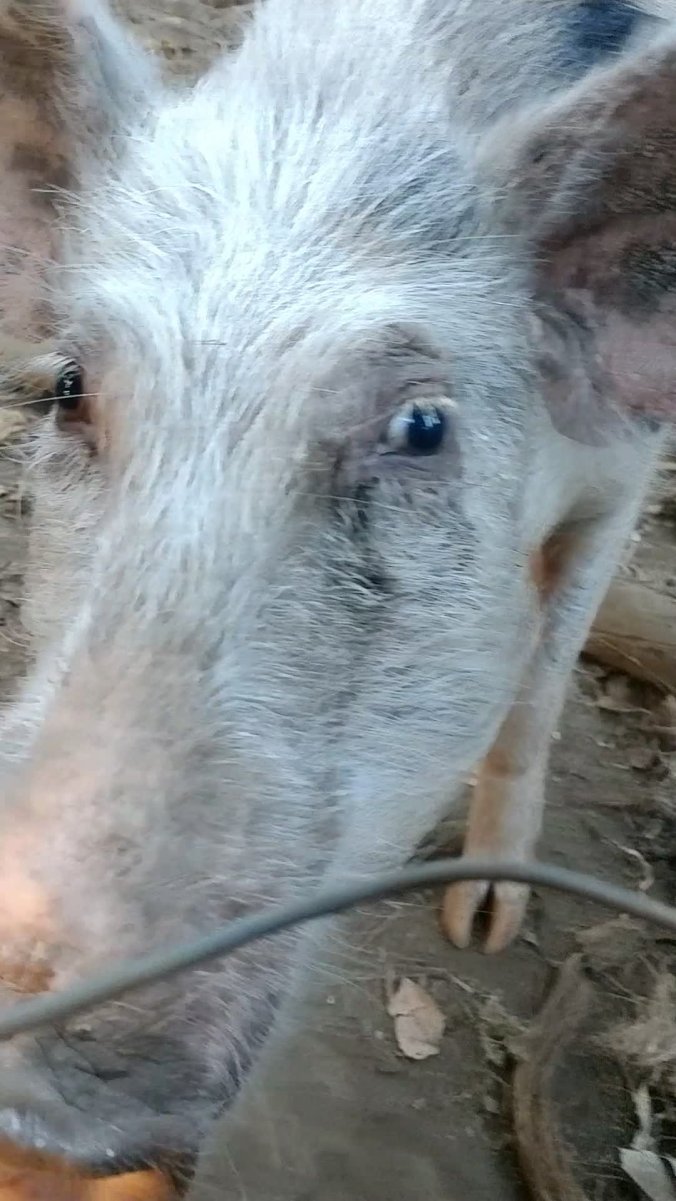 Even the pigs are clean. The pigpens are not full of poop. Pigs kill me!

The soil is worn smooth by foot traffic. Vegetation debris, leaves etc gets raked up and burned.

This burning was in process when we purchased some fuel.

Top photo above is the fuel depot. Note that in the background of the photo there are brush piles on fire. Bottom photo is a close up of the fire. Maybe 15 meters from the fuel depot. Struck me as unusual.

Masing’s dad measures out a jug of gasoline for our dinghy motor. Dig the fire over his right shoulder. Don’t try this at home.

This is the opened beanpod. There is a fleshy covering over each bean. You can eat that part and spit out the bean. Like you might eat pomegranite. Quite citrus flavor. I tried the bean raw and would not recommend eating this. Really needs roasted to become chocolate as we know it. 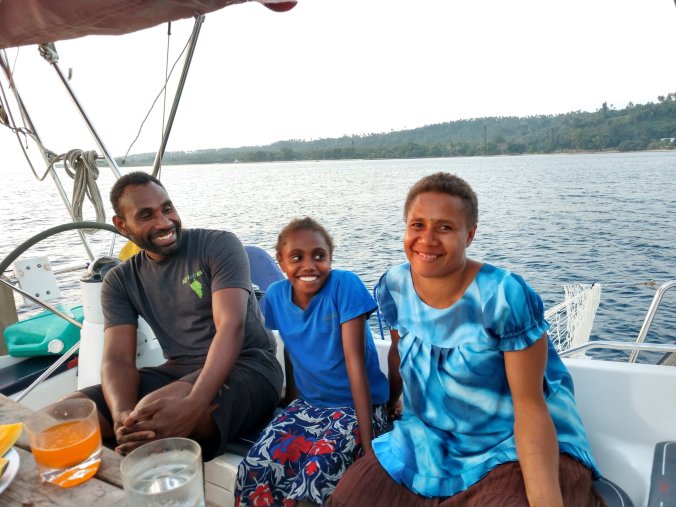 Before we left, Masing, Ruth and their daughter Leisale joined Spill the Wine for dinner. Beef au Egg was tasty. 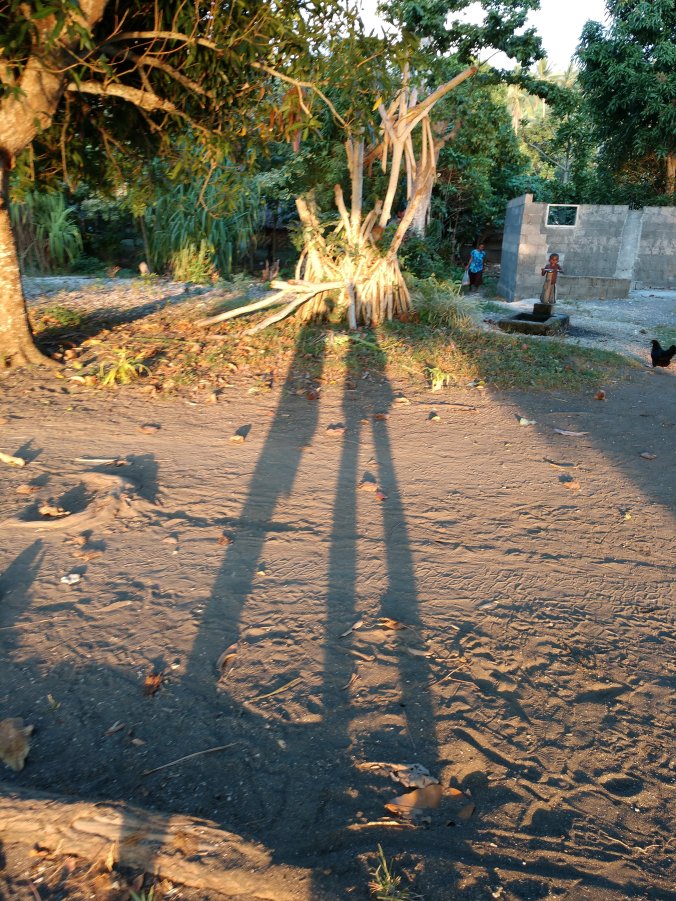 Thank you Masing and Ruth. Thank you Lamen Bay. Long may you run!

Where Are We Now?

Click here to be taken to the snap.ocens tracking website. When you get there, on the left side of the page, type "spill the wine" into the "Name" field. (No, "ocens" is not a misspelling, we claim no responsibility.) ;-)